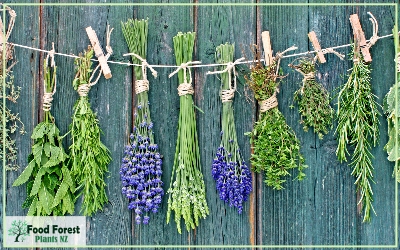 Growing a food forest garden is the perfect time to embrace permaculture and add in many types of medicinal herbs to the herbaceous layer.

It is important that you know what you are planting, and that you label them well. Growing medicinal herbs and plants is a good way to become more self sufficient, but along with that you also need to know how to prepare and use the herbs safely.

To do this I recommend that you look in to some real in depth herbal medicine training.

You can grab a PDF of these plants here

California poppy is remarkably drought tolerant and quickly spreads and makes themselves at home. The plant is easy to establish by seed, and thrives in full sun locations with highly fertile but well-drained soil.

The Californian Poppy is related to the opium poppy but it is much more gentle. It is one of the best natural nervous system relaxers, sedatives and pain relievers around.

Catnip is a member of the mint family. There are over 100 varieties of catnip, but the most common one has gray-green heart-shaped leaves and hairy stems.

When taken as a tea, catnip can help ease a chronic cough or help you fall asleep.

Catnip grows well from seed in small pots on your patio or in your herb garden. It is a native to much of Europe, and is also known as catmint, catswort, field balm, catrup, catnep and cat’s-play.

Considered by some to be a cure-all, chamomile is commonly used as a sedative for anxiety and relaxation.

It is used in Europe for wound healing and to reduce inflammation or swelling. Few studies have looked at how well it works for any condition.

Chamomile is used as a tea or applied as a compress. It is considered safe by the FDA. It may increase drowsiness caused by medicines or other herbs or supplements. Chamomile may interfere with the way the body uses some medicines, causing too high a level of the medicine in some people. As with any medicinal herb, talk with your healthcare provider before taking it.

This common weed is a great digestive tonic as well as bladder curative. It helps stimulate the kidneys to increase urine production, which helps flush out your urinary tract.

Eating the leaves or making tea with the flowers or roots are the most common ways to use dandelion.

If you choose to harvest wild dandelion, check that isn’t from the side of the road or anywhere that may have been sprayed or polluted.

It is often used as a flavor in meals or while preserving pickles. The seeds are stronger in both flavor and beneficial oils.

Tea can be made with either the seeds or the leaves to help aide digestion and soothe indigestion.

Echinacea is commonly used to treat or prevent colds, flu, and infections, and for wound healing. More than 25 published studies looked at how well Echinacea worked to prevent or shorten the course of a cold, but none were conclusive.

A 2014 study compared Echinacea with a placebo for treating colds. Results found that Echinacea did not have any effect on a cold. Other studies have also shown that long-term use can affect the body’s immune system. It should not be used with medicines that can cause liver problems. People allergic to plants in the daisy family may be more likely to have an allergic reaction to Echinacea. The daisy family includes ragweed, chrysanthemums, marigolds, and daisies.

Garlic is used for lowering cholesterol and blood pressure. It has antimicrobial effects. Reports from small, short-term, and poorly described studies show that it may cause small reductions in total and LDL cholesterol.

But German research results on garlic’s cholesterol-lowering effect have been distorted for a positive effect, the FDA says. Researchers are currently exploring garlic’s possible role in preventing cancer. The FDA considers garlic safe. It should not be used with warfarin, because large amounts of garlic may affect clotting. For the same reason, large amounts should not be taken before dental procedures or surgery.

Ginger is used to ease nausea and motion sickness. Research suggests that ginger can relieve nausea caused by pregnancy or chemotherapy. Other areas under investigation are in surgery and for nausea caused by motion. Reported side effects include bloating, gas, heartburn, and nausea.

Ginkgo leaf extract has been used to treat a variety of conditions such as asthma, bronchitis, fatigue, and tinnitus. It is also used to improve memory and to prevent dementia and other brain disorders. Some studies have supported its slight effectiveness. But exactly how gingko works isn’t understood.

Only extract from leaves should be used. Seeds contain ginkgo toxin. This toxin can cause seizures and, in large amounts, death. Because some information suggests that ginkgo can increase the risk of bleeding, it should not be used with nonsteroidal anti-inflammatory medicines, anticoagulants, anticonvulsant medicines, or tricyclic antidepressants.

Ginseng is used as a tonic and aphrodisiac, even as a cure-all. Research is uncertain how well it works, partly because of the difficulty in defining “vitality” and “quality of life.” There is a large variation in the quality of ginseng sold. Side effects are high blood pressure and tachycardia. It’s considered safe by the FDA, but shouldn’t be used with warfarin, heparin, nonsteroidal anti-inflammatory medicines, estrogens, corticosteroids, or digoxin. People with diabetes should not use ginseng.

Goldenseal is used to treat diarrhea, and eye and skin irritations. It is also used as an antiseptic. It is also an unproven treatment for colds. Goldenseal contains berberine, a plant alkaloid with a long history of medicinal use in both Ayurvedic and Chinese medicine.

Milk thistle is used to treat liver conditions and high cholesterol, and to reduce the growth of cancer cells. Milk thistle is a plant that originated in the Mediterranean region. It has been used for many different illnesses over the last several thousand years, especially liver problems. Although study results are uncertain, some promising information exists.

You can grow peppermint from seeds or buy seedlings from the store. It also readily grows by dividing an existing plant.

Mint will spread and take over your garden, so it is best grown in it’s own space or in a pot that has been sunk into the ground.

Peppermint is great as a mood and energy booster, it encourages good circulation and it acts as an anti nausea and treats indigestion.

Saint John’s wort is used as an antidepressant. Recent studies have not confirmed that there is more than a slight effect on depression. More research is needed to determine the best dose.

A side effect is sensitivity to light, but this is only noted in people taking large doses of the herb. St. John’s work can cause a dangerous interaction with other commonly used medicines. Always talk with your healthcare provider before using this herb.

Valerian is used to treat sleeplessness and to reduce anxiety. Research suggests that valerian may be a helpful sleep aid, but there are no well-designed studies to confirm the results. In the U.S., valerian is used as a flavouring for root beer and other foods. As with any medicinal herb, talk with your healthcare provider before taking it.

Yarrow grows like a weed around here. It’s little flowers can be anything from white, red, yellow and pink and anything in between. The flower colour has no effect on the medicinal properties.

You can make your own styptic powder to stop bleeding instantly by blending dried yarrow leaves in a food processor until they are powdered. Store this in a sealed glass jar and apply it to cuts and abrasions. For an even greater effect add some cayenne powder to the mix. Just don’t get it in your eyes!

Other plants that can be used in traditional Maori medicines that you may like to also grow in your food forest garden include:

If you are really serious about learning more about using herbal medicine, check out the Herbal Academy.

We are so glad you are here! Please learn more about our story here.

For a more information on homesteading and self sufficiency, you can check out our other blog Piwakawaka Valley Homestead

Affiliate Disclosure
In order for me to support my blogging activities, I may receive monetary compensation or other types of remuneration for my endorsement, recommendation, testimonial and/or link to any products or services from this blog. See our Disclosure statement for more information.